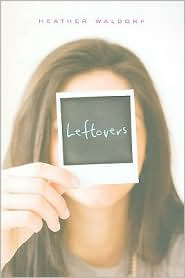 After a lifetime of sexual abuse from her father, Sarah hates having her picture taken. When Sarah's mother's boyfriend tries to take her picture, not realizing what it will trigger, Sarah freaks out. She smashes the camera and flees in his car. She can't really drive (she doesn't even have a license) and her ride is quickly cut short when she crashes the car. In the aftermath, she is sentenced to do community service at a summer rehab camp for dogs. It is there that she befriends a young cancer survivor and a big sloppy dog. With them (and all of their combined emotional baggage) she is able to face her fear of photographs and of the sexual abuse that caused it.

The idea of the story is pretty compelling and the narrative sucks you in pretty quickly. The writing is functional and flows well enough. However, I found myself feeling detached from the characters and simply wishing that the story would end as soon as possible (perhaps because having exposed the sexual abuse Sarah experienced right up front, I wanted it resolved as an issue as soon as possible). In a story like this, you start flipping the pages simply to get on with it. And, while there is a twist or two, the story essentially delivers what you expect in the end. That's not a fatal flaw but leaving so little else in the story makes the journey seem less worthwhile.
Posted by Paul at 9:09 PM