The Life of Glass, by Jillian Cantor 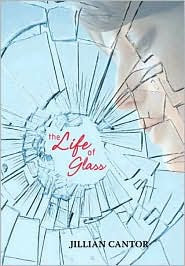 Glass may be very fragile (forming cracks at an incredibly high speed if dropped), but it is also very durable (taking a million years to break down). Glass is a metaphor for the changes in Melissa's freshman year (whee friendships shatter easily but the basic roots are nearly impossible to dissolve). Her father has recently died from cancer, but the focus of this story is on Melissa's friendships and romances (and those of her friends and her sister). There isn't much of a plot to this story, but rather a series of dramatic events that exist to illustrate and highlight her growth.

Cantor's earlier book September Sisters bothered me for its lack of plot and its general formlessness. This novel is written in much the same style, but is more successful. Melissa is an interesting character and her relationships have a complexity to them (based as much upon acceptance and forgiveness, as they do about attraction). The friendships have the transience and insecurity of adolescence. Cantor understands the psychology of human interaction and depicts it well. One suspects that she would just prefer to write about those relationships than be burdened with a plot and a story. In this case, it works out.
Posted by Paul at 5:55 PM