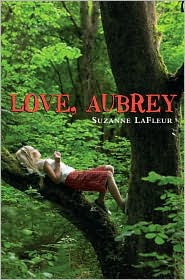 It is rare for a book to shine new light on a tired topic. And what could be more tired in kidlit than death and grieving?

Aubrey loses her father and little sister in a car accident. A few weeks after that, her mother abandons her. After coping at home alone for a week, Aubrey's grandmother rescues her and takes her to live in Vermont at her home. In that new home, Aubrey befriends the girl next door and established a quirky friendship with an emotionally-troubled boy at school. All along, she copes with her losses and slowly recovers.

It's such a cliche plotline with my least favorite subplot (child abandonment) as an opener, that I didn't have a lot of hope for the book when I started. I expected to be able to predict every plot turn as it came and I was prepared to groan my way through it all to the tearful confrontation and life-affirming ending. I was only half right. Yes, the plot followed the predictable direction and LaFleur made no attempt to throw up any surprises in the action of the story. However, she managed to catch me off-guard with her totally original handling of how Aubrey (and her friends) actually handled the challenges.

There's a surprising clarity to Aubrey's behavior. One might even accuse it of not being age appropriate, but I think that would do a disservice to kids. And it isn't so much that Aubrey doesn't act her age as it is that she refuses to let herself be dragged down into melodrama. She certainly has her down moments and she doesn't always act calmly, but she is able to reason through things. She doesn't fight, but she stands up for herself. Through her difficulties, she is able to reach insights that are inspiring. I found that refreshing.
Far too often, authors create obvious flaws in their characters for the sole purpose of "solving" their problems by the end of the book. Aubrey is an eloquent and capable problem solver from the beginning, but she has plenty of problems to work through. In creating a more complex and vibrant heroine, the story is raised far above any sort of manipulative tear-jerking formula into something much more interesting.
Posted by Paul at 10:11 PM

I loved this novel. It came out around the same time that Gayle Foreman's IF I STAY was released, which was interesting since they're both family tragedy stories. I loved them both but liked Aubrey as a protagonist a bit more-- she's precocious, but I don't think unrealistically so.