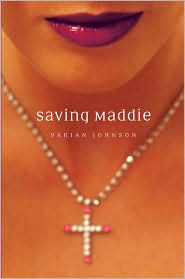 Years ago, when they were kids, Josh and Maddie were close friends. When Maddie moved away, she promised that she would stay in touch. The promise was easily broken, but Josh never forgot her. When she returns five years later, showing up at church in a scandalous dress, it is clear that she has changed. Josh's parents, fearing for his reputation, forbid him from seeing her, but Josh can see beyond her appearance. He is convinced that he can rescue her and bring her back to the church. But are his motives pure or does his own stirred-up feelings play a role in his desire to help?

The story is a bit hard to describe as it is about as much about what is not said as it is about what is. Overall, the pacing is a bit slow, but Johnson's focus is more on characters than storytelling. And he has created a pair of vivid characters, struggling to find their place. Maddie wants to regain her self-respect (and escape the label of being a slut) while Josh is trying to grasp at who he really is (and move beyond his reputation for being the goody goody minister's son). Neither of them knows where their search will lead and that exploration is really the point of the story.

In sum, this is a very basic example of a coming-of-age story (in the grand tradition of many classics) and deals with those issue of finding oneself and defining one's role in the community in the most basic sense. The story has a timelessness to it that promises the book long legs.
Posted by Paul at 5:42 PM