Every Little Thing in the World, by Nina de Gramont 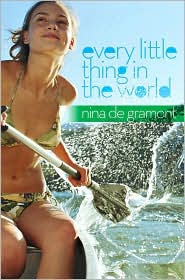 After screwing up one time too many, Sydney's mother gives up on trying to control the girl and ships her off to her father. Dad has his own idea of what Sydney needs and decides to send her to Northern Ontario for a month-long Outward Bound canoe trip.
Sydney, however, has deeper problems: she's pregnant and doesn't know what to do about it. There are practical issues (where to find the money to pay for an abortion, whether to tell her parents, etc.) but she also simply doesn't know what she wants. In those weeks on the water, Sydney gains perspective about her life so far and about her relationships with others.
The story follows mostly familiar plotting and presents few surprises, but it is pleasing to read and well-written. Sydney's voice is far too mature for her age and sounds more as if she were writing the story in her adulthood with the wisdom of hindsight. This makes her thoughts insightful but unrealistically sober and clear-headed. Also, for allegedly being such a screw-up before the story begins, she makes almost no bad choices in the course of the novel, so that her bad-girl reputation seems unearned. This also makes the story a bit unbelievable.
Putting these concerns aside, the book makes fine summer reading. The characters are complex and interesting. I particularly like the youth-at-risk Mick, who proves both sympathetic and repulsive at the same time. Romantic relationships form and break with a stunningly realistic ease that rings true and also serves to underscore the plot of self-discovery.
Posted by Paul at 9:43 PM