For Keeps, by Natasha Friend 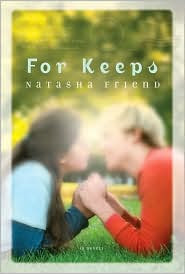 Sixteen years ago, Paul (the boy who got Josie's mother pregnant) moved away without a second thought. It was hard on her mother to raise Josie on her own, but it also brought mother and daughter very close together. All of that is thrown into jeapardy when they spot Paul's parents (Josie's grandparents) in a local grocery store and Josie learns that they have moved back into the area. This discovery sets off a chain of events that irrevocably changes their world and challenges everything Josie thought she understood about her mother, her father, and the nature of love itself.
On its face, this is fairly predictable YA fare and will not offer any major surprises, but Friend has a particularly strong talent with depicting complex familial interaction (as seen in her previous novels like Perfect). It's easy to find parallels to Gilmore Girls here but Josie and her mother Kate's relationship is far more realistic and nuanced. In a similar vein, Josie's relationship with her BFF Liv (and with Liv's Dads) is also refreshingly honest.
I randomly picked this up off the shelf at my local library, but I think it deserves a good buzz, so I'd recommend it to others.
Posted by Paul at 10:49 PM