I Now Pronounce You Someone Else, by Erin McCahan 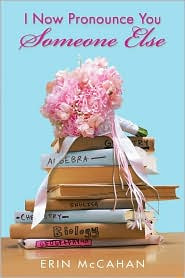 Bronwen has always had trouble feeling wanted. She can't manage to communicate with her mother. Her stepfather, while nicer, has never wanted her (proof: when Bronwen was 13 years old, he promised that he would adopt her but then failed to do so without ever bothering to explain why). She's just about convinced that she was switched at birth and really belongs to another family.

In her senior year, she starts to date Jared and falls in love with both him and his warm family. Overwhelmed by their kindness, she doesn't hesitate a minute to accept when Jared proposes marriage to her. But as time passes and the wedding day approaches, Bronwen finds that marriage -- far from giving her a new family in which to develop -- will actually mean sublimating her individuality. She begins to wonder if it is really the right decision for her.

This book, which is really about identity and finding oneself, seems oddly packaged. The book's title suggests a humorous book, while the blurb stresses her sense of being a changeling. Neither is really the point of the story. The tale is in fact rather sad and the ending almost tragic (although a lengthy prologue forces an eventual happy ending on to the story). The overall effect is cloying and difficult to follow. I spent the first half of the story trying to figure out where we were going with this girl. It is only after the proposal occurs that we figure out the point and by then it is pretty obvious where we will end up. Even with what should be a fairly interesting material, McCahan doesn't spin a very interesting tale. My sense is that the book is at least partly biographical, which may make it a cautionary tale, but the writing is very factual and lacks the lyricism that Bronwen's struggles call out for.
Posted by Paul at 8:43 PM