The Kind of Friends We Used To Be, by Frances O'Roark Dowell 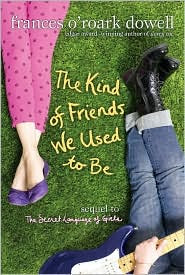 This sequel to The Secret Language of Girls picks up pretty much where the former left off. Kate and Marilyn are entering seventh grade. They've learned from the past year to not take their friendship for granted, but they still struggle with maintaining it. AS the girls slip further and further away from each other, they find their friendship based more upon nostalgia. Simultaneously, they find themselves drawn into new friendships with both girls and boys as they struggle to make the transition into adolescence.

Along with trying to keep the flame of their friendship burning, they also are carving out they sense of identity. Marilyn is sure that cheerleading and becoming popular are what she wants from life while Kate is drawn to a riot-grrl persona. But they find themselves constantly questioning their choices.

As before, the story is told in first-person alternating points of view, which allows us to get inside the girls' heads clearly. This brings the necessary immediacy, but it also exposes a flaw: the author's voice frequently imposes a level of self-realization that seems out of keeping with any person (let alone a typical tween). This is necessary to provide the poignant angst that the author is shooting for, but it also makes the story a bit less realistic.

The prior book was groundbreaking for its insights into the troubles of tweenhood, for the dexterous way of navigating the choppy seas of tween friendships, and for so respectfully tackling the painful transitions. For the target audience, it probably provided some consoling empathy. For older readers, it gave a painful reminder of a past best forgotten. The sequel doesn't really try to do more. With the exception of introducing the volatile territory of girl-boy friendships/jealousies into the mix, the sequel is basically more of the same. To many readers that is probably more than sufficient.

The draw of both books is the clear-eyed way that the author shows how very decent children, with capable moral compasses, can still hurt each other. That they are such good kids makes us sympathetic to them, and makes the hurting all that more difficult to observe.
Posted by Paul at 11:11 AM