My Name Is Memory, by Ann Brashares 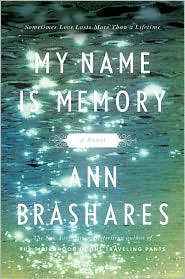 Best known for the Sisterhood of the Traveling Pants series, Ann Brashares ventures into strikingly different territory with this broadly-scoped story of reincarnation, revenge, and undying love.

In her final year of high school, Lucy feels strongly drawn to a loner named Daniel. But she never works up the nerve to even speak to him, until in a very awkward moment, they get the opportunity to confess their feelings. This potentially romantic moment goes very wrong when Daniel insists on calling her "Sophia" and doing so, for some reason not quite understood by her, scares her off. He flees away and Lucy, while initially relieved, becomes obsessed with finding him again.

There is a reason to this madness. They are both reincarnated souls. As it turns out, many people are, but Daniel is special: he remembers all of his previous lives. And he knows that he and Lucy have repeatedly been lovers in the past. Lucy, for her part, has no such memory but is open to the idea. Lucy slowly learns the truth and puts the pieces together. Will they be able to be together in this life and end a millennium of searching and loneliness?

Brashares is a good writer and her rather lengthy story manages to keep the reader's interest throughout. But I'd still have been happier with some more judicious editing (there is only so much angst and ponderous statements of endless love that one can take!). The tropes (love at first sight, love never dies, etc.) that fill the book are pretty traditional old material. But for lovers of romance novels, this pretty much has everything, including a little bit of action. And it hangs together well as Brashares paces everything beautifully. The book is pitched in such a way to appeal to all ages. The characters are young enough to make this YA, but old and mature enough to bring in adult readers.

The beautifully open ending (and a significant number of unresolved questions) invites the inevitable sequel. With its supernatural themes, this is Brashare's answer to the Twilight franchise. Who needs vampires, when you can be reincarnated instead?
Posted by Paul at 9:17 PM