A Star on the Hollywood Walk of Fame, by Brenda Woods 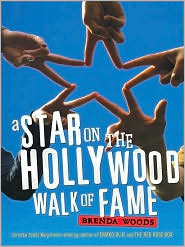 Nine tenth-grade students in an urban high school in Los Angeles are taking Ms Hart's creative writing class. To get them thinking about alternative concepts of fame, she gives them an assignment to imagine a world in which stars on Hollywood Boulevard are handed out for lots of reason (beyond just acting) and to describe what they might do to earn one. During the two week period in which they have in order to complete the assignment, the rough life of these kids frequently intervenes to color their perceptions on how to answer the question.

As a child of the suburbs, I generally prefer to read about kids growing up in the suburbs (or in rural areas). Also, books like this always seem a bit calculated to win acclaim from politically correct suburban librarians. My cynical mind sees marketing ploy, and Woods' array of awards reinforces rather than dispels those biases (I'm a fervent believer that the Coretta Scott King award was designed to ghettioize non-white literature to justify not considering books like this for a Prinz... but I digress).

While it is true that there is a bit of the usual static (tough kids, well-meaning liberal middle-class teacher, cue the "Stand By Me" music?), this book shines on its own merits. Woods has a great ear for dialog and the characters speak in an angst that sounds (to my privileged ears) like the real thing. With a very large cast of characters in a wafer-thin book, it would have been easy to create identical voices (or fall back into stereotypes), but the kids in this book really come forth as individuals, each one of them truly shining like a star.

The ending is a bit heavy-handed and pedantic (as if the author doesn't trust the reader to get the gravitas of the story without having it shoved down their throat), but I can indulge her a bit because I enjoyed the ways in which this book both met and exceeded my expectations.
Posted by Paul at 4:19 AM