God Is In the Pancakes, by Robin Epstein 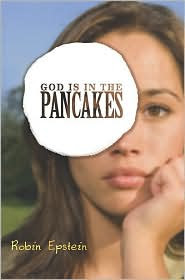 Assisted suicide is a pretty unusual topic for a YA book, so this is already off to a notable start....

When her father moves out on his family, Grace becomes disillusioned and bitter about the subject of romance. The fact that her sister's boyfriend is two-timing her doesn't help matters much either. But her perspective starts to change when she takes a job as a candy striper at an old age home and meets a man dying of Lou Gehrig's Disease. At first, he serves as an obvious surrogate father figure, but when he begs her to help him die, things take a more serious turn.

She struggles with what to do about his request, especially as she gets to know the man's family. But she has other issues with which to deal: helping her sister confront her boyfriend, wrestling with whether she wants to reconnect with her estranged father, and dealing with a romantic entanglement of her own.

For its originality and its sensitivity, I liked the main plot of the story (the assisted suicide), but the rest of the story seemed less well-developed. I got the fact that Epstein was tying all of the subplots together with the themes of love and loyalty (with each story illustrating a different perspective of the themes), but the subplots are tired cliches (awkward boyfriend, jealous sister, absent father). Only the elderly couple struggling to end their relationship in dignity and Grace's wonderment at observing it seemed fresh and new. In many ways, the story would have benefitted from a trimming.
Posted by Paul at 8:04 AM