How to Steal A Car, by Pete Hautman 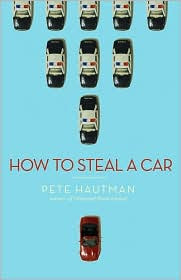 A friend asked me while I was reading this book, "It's not an instruction manual, is it?" Not really. It's ostensibly a work of fiction, but the moral vacuum in which it is written (combined with the details which it describes) left me wondering what the author's intent really was.

It's a story about Kelleigh and her decision to start stealing cars. Step by step, we see how a whim becomes a prank, and blows up into a criminal career. Told in first-person past tense, the tone is more of a confessional, which implies a bit about how you would expect the book to end. Surprisingly, it doesn't wrap up so neatly.

When it comes to YA books that deal with crime, I have a pretty hardcore viewpoint that they need to end badly (for the criminal). But aside from a small amount of lip service to the idea that what she is doing might just be wrong, this story never really gets to the idea that crime does not pay. So, the ultimate message is that it is dangerous but fun to steal cars. And I'm not sure about what is the value of that position.

It also seems that Hautman avoided the issue by filling up the book with too much other stuff. From the unimportant fact that Kelleigh is color blind to the red herring that Kelleigh's Dad is having an affair, the story is awfully busy with subplots that neither are resolved nor related back to the main plot (would it have been so hard to have her - because of her colorblindness - steal the wrong car or run a red light?). With the affair thing, I suppose that we're trying to set up a justification for Kelleigh's behavior, but it's a pretty lame one and we certainly never connect the dots. What a mess!
Posted by Paul at 4:28 AM