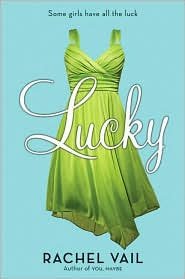 Phoebe considers herself to be pretty lucky: she's beautiful, popular, and rich. So, it comes naturally to her to plan, with her best friend Kirstyn, the world's greatest middle school graduation party. But then things start to go badly. Her mother loses her job. Credit cards start to get declined. Her parents start having hushed conversations. Worst of all, her parents inform her that she'll have to cancel the party -- an act which would mean embarrassment in front of her entire class. All of which probably makes Phoebe look like a spoiled brat (and she is accused of being so on several occasions) but the issues are actually more complicated.

As one would expect, facing the dilemma of how to save face (and even protect her family's reputation) makes Phoebe evaluate her values and friendships. And she makes some startling discoveries that will take even the reader by surprise. In the end, it all is wrapped up neatly, but not before a carefully-engineered climax has the tears flowing.

The engineering of the conclusion says a lot about the book and the writer. Vail is a great writer with a list of successful books to her credit and she certainly knows how to craft a story. While certainly not as vacuous as some novels out in the mass market, this will still appeal to casual "Summer" readers. It sets no major literary milestones, but it is an enjoyable book with more than a few thought-provoking thoughts and heart-warming moments.
Posted by Paul at 4:40 AM