Nothing, by Janne Teller 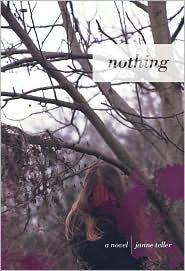 When their classmate Pierre Anthon quits school, announcing that "nothing matters," his classmates in 7A are initially amused. But as Pierre takes up residence in a tree and starts mocking them for continuing to go to school and continuing to insist that their lives are meaningless, the students become obsessed with proving him wrong. Their method is to assemble a pile of "meaning" (items which are valuable to each of the children). And while the task starts out innocently enough, it escalates into cruelty and sadism. And yet still the meaning of meaning remains elusive.

Read literally, the book is disturbing and unpleasant, delighting in imperiling children and animals in the horrible way that Scandinavians seem to enjoy in literature and art much more than the rest of the world. Anyone with a weak stomach or low tolerance for cruelty will probably want to steer clear. However, take the story as a parable and it becomes more interesting and thought-provoking, but still not really YA. The search for meaning will of course be understandable to all ages, but the jadedness of the way it is presented reads more like an adult novel.

This is not a novel for interesting characters as everything is passively narrated from a single perspective and all of the characters are symbolic anyway. And it's not a novel for story since that too is simply an extended analogy and the action cannot be taken seriously. In the end, this is more of a book for discussions (ironically enough, about what it all "means") which, if we believe Pierre, simply brings us back to the book's title.
Posted by Paul at 9:05 AM