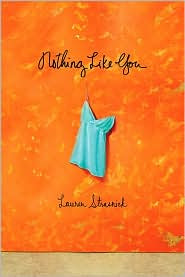 Holly knows that there is no future in her relationship with Paul. For one thing, he's way out of her league. For another, he's got a girlfriend (the equally fantastic Saskia). But when Paul makes the moves on her, she finds it hard to resist and she'll do anything to hold on to that feeling. The relationship that starts with no future becomes a serious danger to her other friendships as she finds it harder to hide what is going on from her best friend Nils and as she grows closer to Saskia. But even though she knows it is wrong, she continues to fall in deeper and deeper.

While I'd like to be an optimist and hope that not everyone can personally relate to this story of betrayed friendships and infidelity in the halls of high school, I imagine that most of us have been there. It would be easy enough to despise Holly and her lack of will power (as well as her constant mistakes) but Strasnick does a fantastic job of making her believable and sympathetic (and the pure evilness of Paul makes this a bit easier as well). And she does it without resorting to some more obvious tactics. For example, the death of Holly's mother some months before the story opens would form a perfect justification of the lapses of judgment, but Strasnick never plays the cards that way. Holly's mistakes are truly her own.

Holly's (mostly) platonic relationship with Nils is a wonderful part of the story. On the one side, he perfectly illustrates the unevenness of the sexes in these romance games, but he also provides a nice foil for Holly. And the stresses and strains in their relationship share the authentic flavor of the rest of the story.

If I have any complaints, it is probably with the adult characters. Holly's father Jeff is definitely not checked in on his kid (probably because he is blinded by the loss of his wife, but it is never explained). Holly's drama teacher is a throwaway -- I kept expecting something profound to come from the relationship but it just never got there. Given the total lack of adult supervision going on here, I think that the grown-ups could have been left out altogether with little harm done.
Posted by Paul at 10:13 AM