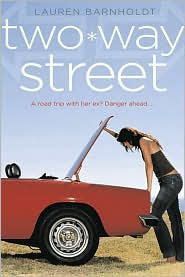 Two weeks ago, Courtney's boyfriend Jordan unceremoniously dumped her. Unfortunately, now the two of them are stuck in a already-planned cross-country road trip to Boston College, where they are both starting school in the fall. It's awkward to say the least! But there's a lot more to the story of their break up than immediately meets the eye (and in fact the relationship has always had a bit going on behind the scenes). Through a lot of flashbacks and told in alternating voices between Courtney and Jordan, we learn the truth about their relationship. And through the trip itself, Courtney and Jordan get a chance to reconsider their decisions.

The story is well-enough written, but it never took off for me. The conflict between the two of them is so contrived that it's neither believable nor even interesting. Instead, it is mostly based around ego and an inability to communicate. Courtney is extremely narcissistic and self-centered (even by teen standards). Jordan alternates between arrogance and horniness (or both simultaneously) -- in the ever-clever vocabulary of the book, he's a bit of a "tool." As a result, I nearly immediately disliked both of the characters. None of this was helped by the story. As road trips go, not a whole lot happens on this one aside from Courtney spending a lot of time barfing. So, the story becomes more about the author doling out the Truth is small dollops.
Posted by Paul at 10:25 PM