After the Kiss, by Terra Elan McVoy 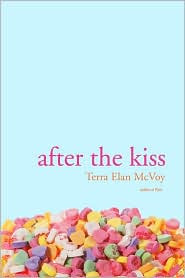 Two seniors, getting ready to graduate and move on, remain stuck on a boy - the same boy. At first, neither one of them knows about the existence of the other. Camille is new in town, a victim of having been moved around the country regularly by her Dad. Her scenery has changed so often that she no longer even registers the changing names of her latest BFF. When she meets Alec at a party, she has no way of knowing he is already taken. The other girl, Becca, is Alec's betrayed girlfriend. When they accidentally become friends (without realizing who the other one is at first), it is Becca who is the first to realize who Camille is and what she has done. While she has the advantage, Becca toys with Camille and plans out revenge, yet something holds her back from carrying out her plans.

It's an interesting story, although not as original as McVoy's previous novel Pure, and has an unusual structure. Camille's sections are all written in lower-case second person prose. Becca's chapters are in verse (with frequent parodies of poetry lifted from the Norton Anthology). Becca's poetry can at times be a bit twee but at other times shows real strengths (and was certainly the best part). I'm undecided about how I feel about that wide variance (there's something stereotypical about a teen who writes bad poetry). Camille's sections, on the other hand, really got on my nerves. Second person narrative is exhausting (coming across more as constant criticism and accusations) and the lower-case spelling makes it all very hard to read, without adding much.
Posted by Paul at 8:07 PM