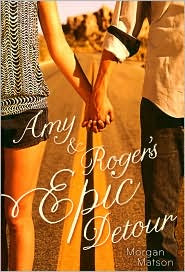 Amy's family is falling apart. Her father is dead. Her brother is in drug rehab. Mom has moved across the country, leaving Amy alone in California. Now, she wants Amy to drive the family car and join her in Connecticut. Amy's terrified of driving ever since the car accident that killed her father so Mom carves out a compromise: she finds the son of a family friend named Roger to do the driving. And thus is launched a road trip.

Her Mom's carefully-planned itinerary quickly gets bypassed as Amy and Roger decide to explore a few side-destinations along the way. And what starts as a few detours becomes a much more important journey for both of them as they confront a series of issues and clear up some serious emotional baggage.

The story works on a number of levels. There's the overly predictable love story, which is pretty lame, but develops at its expected speed. There's the similarly predictable shedding of issues which at least is paced realistically, albeit in a way that was more tedious. If this was all that the book had going for it, I'd probably toss this out is slight formulaic fodder. But there's all sorts of lovely touches, from the play lists to the travel guide of burgerology, which liven the story up and make it fun. All sorts of great research went into the travel aspect (for all the places which I knew, the details seemed right) and I enjoyed that part. So, while the story telling itself didn't really offer anything new, I liked the details and enjoyed the trip. And even a formula can be fun with the right dressing.
Posted by Paul at 7:14 PM