As Simple As It Seems, by Sarah Weeks 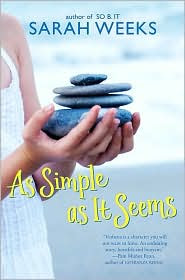 In fifth grade, Verbena learns that her parents are not her real parents. She was adopted. In her mind, this explains why she is such a screw-up. After all, how could she not be when her biological parents are an alcoholic and a murderer? Just the idea of it drives Verbena nuts and triggers her (in her mind, inherited) short temper. She is angry and upset and closes off to her parents and her friends, spending the summer between grades struggling with her mixed-up sense of identity.

Enter Pooch, a "flatlander" from NYC, spending the summer in Upstate New York in Verbena's neighborhood. He's got his own problems (not least of which is that he's convinced that Verbena is actually a ghost!). But from the start, you know that the two of them will help each other through the issues and aid in each others' self-discovery.

With one of the most misleading titles, this economic (180 page!) and tightly-written novel is far from simple and has a lot to say about growing up. While definitely intended for middle readers, there is such a complicated storyline that young readers may get lost or bored. But this is good writing with a timeless setting that will keep this story around for a long time. All of which are the makings of a classic.

In general, I liked the story. The kids were funny, the story lacked any nasty bad guys, and it avoided meanness. There was a bit of gratuitous animal death, but in general this is a gentle tale with universal themes.
Posted by Paul at 12:23 PM