Friend Is Not A Verb, by Daniel Ehrenhaft 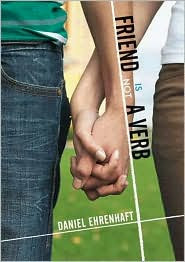 Hen's older sister has been missing for a year, so it's a big deal when she suddenly shows up again (although, suspiciously, his parents don't seem so surprised by the news, suggesting that they may have known where she was for the past year). Unfortunately, his sister's reappearance coincides with Henry getting dumped by his girlfriend and getting kicked out of her band. The latter is short-lived as he gets invited back into the band (albeit not into his ex-girlfriend's bed).

Somehow, despite his total lack of talent, everyone seems to think that Hen has what it takes to be a rock star. His parents are encouraging him to study music. His prodigal sister wants him to take lessons from her fugitive boyfriend. Hen himself is just confused.

Written in a wise-cracking and uber-trendy style that is guaranteed to date itself in weeks, Ehrenhaft's prose will bring a smile to your face (the book, at the very least, has the best title of the year). As literature, however, it left me cold. The characters are fairly thin (why do male writers do such a crappy job with emotions and motivations?) and are largely vehicles for one-liners. There's a decent collection of embarrassing anecdotes and some great physical humor, but the story is going in several directions at once and has a hard time getting off the ground.
Posted by Paul at 10:47 AM