It's Not Summer Without You, by Jenny Han 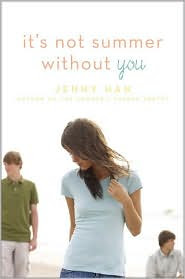 From the cover and the title, you could be forgiven for thinking that this was a summer romance with a beach and a boy. And it actually has both things in it, but this sequel to The Summer I Turned Pretty is really a story about grief and the acceptance of loss, tackling those subjects in a poignantly mature, yet totally age-appropriate, way.

It's one summer later since the first novel and the world has changed dramatically. Conrad has gone missing from school and Jeremiah seeks out Belly to help him try to find his brother. Through flashbacks, we quickly learn the most important events: Conrad and Belly's failed romance and the death of Susannah to breast cancer. The latter event hangs on everyone -- the boys miss their mother, Belly misses Susannah as the mother she never really had, and Belly's mom misses her best friend. Of course, ultimately they overcome it, but it's the voyage that matters.

There is a tendency in YA to assume that teen readers aren't interested in the adult world. And while I suppose there is some truth in that, Jenny Han takes a very different approach in this series. The novel is very much about the kids, but the children exist in the context of the adults and the two parties react/respond to each other in realistic and measured ways. Perhaps as a grownup myself, I appreciate the fact that we aren't segregating the worlds. And it really works with Han's interest in nostalgia and skill at portraying what is lost in the process of growing up (showing children halfheartedly seeking adulthood and adults wistfully recalling youth).

I also like the fact that this sequel isn't rehashing its predecessor. While it includes the same characters and there is some continuity in themes, the story has moved on and deals with a completely different topic than the first book.
Posted by Paul at 7:49 PM