The Body Finder, by Kimberly Derting 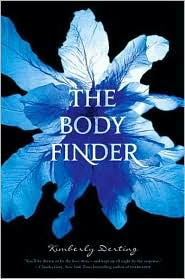 Violet has a supernatural ability to sense dead humans and animals, but only if they have been killed. And she also has the ability to sense the killers as well. Ever since the talent first revealed itself when she was eight, Violet has had to keep this talent a secret and only her parents, uncle, and her best friend Jay know about it. But when a series of kidnapping and murders start to take place in her town, Violet gets involved in finding the killer. The situation escalates when the killer starts to stalk her.

Derting has expert pacing with the suspense and mystery angle of this story. The "hunter" as he's called is sufficiently creepy. But the story overall drags because of Derting's insistence on throwing in a romance. In itself, this might be a good idea as Violet and Jay's shifting feelings add a bit of spice to the story and allow the pace to run a bit more slowly, but this is a romance without much spark. I get that they are friends but I just didn't see much fire between them. In fact, most of the relationships in this novel lack much feeling. As a result, I really found myself pushing by them so I could get to the juicy and creepy sections of the book.
Posted by Paul at 11:42 AM