The Hard Kind of Promise, by Gina Willner-Pardo 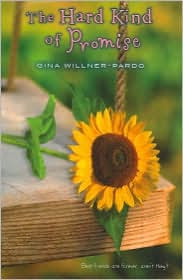 When they were in Kindergarten, Sarah and Marjorie made a promise to each other to always be best friends. For many years, that's what they were. But as they enter seventh grade, the girls are drifting apart. Marjorie is just plain weird and sometimes her behavior embarrasses Sarah. Sarah wants to stay friends, but it's hard when Marjorie doesn't share her interests. As the two girls branch out and acquire new friends, they struggle with their feelings of guilt and loss, trying to figure out if there is a middle ground that can save their friendship.

This is fairly familiar ground for middle readers (the classic example is Lynne Rae Perkins's All Alone in the Universe), probably because changing loyalties are common enough for this age cohort. As such, the book doesn't exactly chart new territory, but it makes a nice supplement to its predecessors. The story is notable for avoiding any of the sort of bitchiness that permeates so many books about girl friendships. There are some not-so-nice kids in this story, but they are quickly sidelined. The characters that matter are all fairly decent to each other. Willner-Pardo's message that, despite one's good intentions, sometimes you just drift apart, is nicely delivered.

I do take some issue with the plot for drifting aimlessly. The primary narrative thread (about participating in a choral competition) is pretty tangential to the purpose of the book. But, the action in this story is inconsequential: basically, the girls could be doing just about anything. The purpose of the story becomes an excuse to show the gentle parting of ways.
Posted by Paul at 11:55 AM