The Total Tragedy of a Girl Named Hamlet, by Erin Dionne 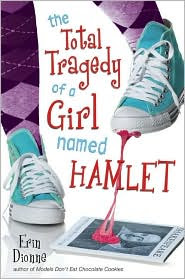 Having to start eighth grade with your genius seven-year-old sister taking your classes with you is pretty bad. Add to it your amazingly nerdy parents who show up at school in medieval garb (they are utterly obsessed Shakespeare scholars). Now stir in the unfortunate coincidence that you are studying a unit on the Bard and that your English teacher is convinced that you are a theatrical genius and should play Puck in an upcoming production of Midsummer's Night (when you're already prone to terrible stage fright). Top it all off with being a girl named Hamlet (with a sister named Desdemona)!

In sum, it's waves of unspeakable humiliation for an image-conscious junior high schooler. Hamlet certainly has her hands full. There's the task of both ignoring and covering for her sister. There's a pair of popular girls who are being suspiciously friendly to Desdemona. There's trying to prevent her parents from embarrassing her further. And finally, there's the small matter of small origami piglets that keep showing up in her locker. Is someone playing a prank or does she have a secret admirer?

The narrative can be a bit uneven at times, but Dionne's story is brilliantly over-the-top. Realism is not the point here and the good-hearted characters and tween-ish dramatic exaggeration target the book's middle reader audience well. This is a fun book, intended to make you smile. The foils are typical -- clueless adults, insecure queen bees -- but that simply makes this book literary comfort food.
Posted by Paul at 5:49 PM