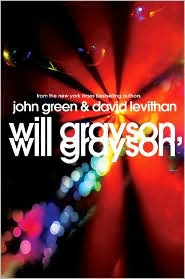 Will Grayson's best friend Tiny Cooper is "the world's largest person who is really, really gay, and also the world's gayest person who is really, really large." The two of them have been best friends since little league when Will stood up for Tiny and Tiny towered over anyone who had a problem with it. Now that they are in high school, Tiny wants to return the favor by including Will in his fabulous musical about love. Will isn't so sure how he feels about the attention. He's managed most of the time to get through life with a low profile.

The rest of the book traces Tiny and the second Will's romance in chapters that alternate between the two Wills. That Tiny never takes a chapter is irrelevant as he is the center of attention from beginning to end. And, like Tiny, the story is larger than life, culminating in a completely over-the-top ending that can only appropriately be described as gay.

I'm not a fan of David Levithan's writing and just as less a fan of his other collaborations (Nick and Norah being a classic example for me of a book where only half of it was any good in my opinion). This one didn't change my opinion much. I'd like to imagine that I could ascribe all of the parts of this book that I loved to John Green (who seriously rocks!) and all the parts I hate to Levithan, but I suspect that this book was so corroborative that that is not possible. I liked Tiny and the o.w.g Will, while the lower case spelling of manic-depressive Will annoyed me and his plot line seemed like a serious distraction. Tiny and the first Will's relationship though reminded me of some of the same buddy relationship in Looking for Alaska and An Abundance of Katherines.

Side note: One of the things that one notices in reading a book like this (when I spend so much time reading chick-lit) is that it takes a lot of digging (mostly through profanity) to get at the inner souls of boys. I'm not entirely sure if that is really true, but it is certainly the modern style. And I wonder what others think: do all the "bitchsqueeler" references make the relationship more realistic or does it seem overly pumped up?
Posted by Paul at 9:50 AM