Wolves, Boys, & Other Things That Might Kill Me, by Kristen Chandler 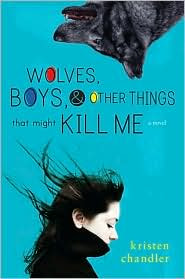 With a title like this, you'd probably be expecting a werewolf book, but this is actually non-fantasy lit. It's the story of KJ Carlson who struggles to win her Dad's trust and her own self-confidence, but gets far more than she bargained for when she agrees to write a column about the wolves in Yellowstone for her school paper. Living on the edge of the park, tempers run hot over the issue of the reintroduction of the wolves. When a series of violent acts threaten her father and her boyfriend Virgil, KJ has to take a lesson from the wolves about standing up for what she believes in.

A bit longish and awkwardly paced, Chandler still deserves major kudos for writing a book about an interesting subject (wolves, ranchers, and the conflict between them). It's an insightful book and fulfills a criteria of mine for truly great books: they teach me something. I really don't know much about wolves and this book manages to work in some fantastic details. Despite the pacing (which jumps strangely ahead at crucial points, causing major plot developments to be underplayed), the characters are varied and the heroine is sympathetic. There is more than enough human interest to keep things going (although the romance is bit lame). I especially liked the gentle way that wolf behavior and teen behavior is juxtaposed and found the analogy quite effective.
Posted by Paul at 8:39 PM