The Year I Turned Sixteen, by Diane Schwemm 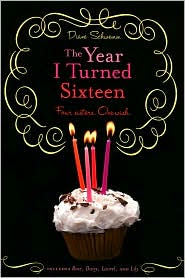 Four sisters take turns recounting their eventful and pivotal sixteenth years. It starts with Rose, who wants to pursue a career on the stage, but has to balance her dreams with a responsibility to help her mother with the family after Dad dies. Two years later, Daisy rebels against her good girl image as a way of acting out her frustration that Mom is dating their next-door neighbor. Three years later, Laurel suffers a deep personal loss. And finally, after all of this, baby-of-the-family Lily struggles with an identity crisis in the wake of all of her sisters' successes and failures.

Strikingly, all four sisters have the same absolutely lousy taste in boys, each one starting off with Mr Wrong and initially clueless about the Right Guy who is right in front of them. Thankfully, they each recognize their mistake and pull through before the nice guy gives up on them. All of which left me wondering how poorly Mom raised her kids to be unable to tell the difference between a nice boy and a monster!

And that underlines my first basic problem with this breezy 700-page epic -- it's terribly repetitive. Each section (envisioned as a standalone book) is basically the same: young woman arrogantly ignores family and friends and throws herself at a worthless creep. After a lot of painfully obvious abuse, she recants and the spurned good guy (who she's treated like crap) takes her back. I get that it's a formula, but I didn't need it repeated again and again!

My second problem is the writing style. For a book pitched at teens, the vocabulary and sentence structure is pedantic and simplistic, as if it was more aimed at tweens. The tone was condescending and written more like a parent would like to imagine teens talk/behave, than how they actually do. It seemed sloppy and careless, and I was disappointed.
Posted by Paul at 5:28 PM