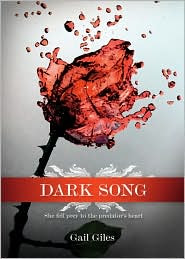 When Ames's father loses his job and the family loses their home, they pull up stakes and relocate from Colorado to Texas. It's a hard transition from living a well-off and privileged life to falling into poverty. Things are not helped by the tensions between her parents. Lost, angry, and confused, Ames finds solace in her new home from a boy named Marc who comes to help her Dad fix up their new house. Marc, however, is not a safe choice for a friend. He has a violent streak and an unhealthy obsession with firearms. Ames, though, needs his companionship and forces herself to overlook the danger signs. It is bound to end badly.

Taut and gripping, this story moves along at a furious pace, that is scary but still quite believable. Readers will like to imagine that they would never be so foolish as to fall into this trap, but Ames is no dummy. She realizes her dilemma quite early on yet still gets ensnared. That will disturb (and maybe even anger) some viewers, but I found it compelling. This is a familial train wreck in high gear here and you'll want to see how it turns out. Overall, a very creepy book, but one that is hard to put down.
Posted by Paul at 5:28 PM