No and Me, by Delphine de Vigan 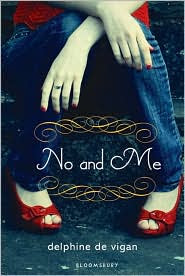 Lou is a painfully shy, but intellectually precocious girl. Having skipped two grades, she's considerably younger than her classmates, but bright and articulate when she wants to be. She longs after the popular Lucas, but as she can't even bring herself to talk to the girls in her class, the idea of approaching him is unfathomable. Back home, things are bad. Her mother is completely withdrawn and her father is in denial over the death of Lou's younger sister. Lou may be very smart, but she struggles to get by.

But then, Lou meets No, a girl on the streets with even greater problems than Lou could ever imagine. Initially, Lou takes an interest in No for a school paper on homeless women, but after the project is completed, Lou can't break free of her attachment to No. Instead, her life gets more intertwined with No's. Strangely, this is initially a very good thing as it brings Lou closer to Lucas and helps Lou's family to repair itself. But, it is also inevitable that things will end up badly and Lou will learn some powerful lessons about the forces that drive a person out on to the streets.

It all starts off a bit slowly, but the story picks up some strength as both Lou and No develop into complex and interesting heroines. No easy answers here about homelessness, but plenty of thought-provoking ideas to explore. The story is a bit gritty and parents might cringe at the amount of child endangerment going on here, but it plays out quite realistically and I found it entirely believable. I'm less fond of Vigan's writing story (all very passive, with little important dialogue to speak of), but the story itself was fantastic.
Posted by Paul at 5:28 PM