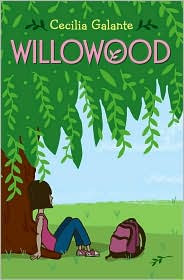 Lily and Bailey were best friends before Lily and her Mom moved away. Lily is having trouble making new friends and misses the secret hiding place that she used to share with Bailey (a grove they called Willowood). Things get worse when Bailey starts drifting away and no longer seems to share the same interests. But when Lily's babysitter takes her to meet a local pet shop owner and his son Nate (who suffers from Downs Syndrome), Lily's visions of friendship expand and she learns to see beyond herself. Themes of parental abandonment and school bullying also play a part in this story of personal growth.

This is a busy little book with quickly paced action that sometimes runs a bit ahead of the reader. Galante has an annoying habit of discussing new characters or plot developments and then backing up to explain them, leaving me wondering if I had missed something (sometimes I had, and had to re-read a section to understand the action). So, in my mind this is a bit hard to read. But also, there is an awful lot going. To bring some sort of conclusion to all of these threads, many of the plot lines get tied up too neatly, but I'll forgive that in a middle reader. I do think that the story could have used more focus.
Posted by Paul at 2:23 PM