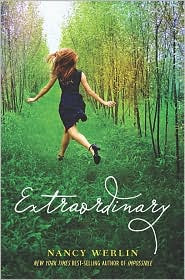 When Phoebe Rothschild befriends an odd girl named Mallory at school, she has no idea of what she is getting herself into. While Mallory appears quite vulnerable, she is in fact a changeling, a faerie who has come to trick Phoebe into undoing a curse set in motion generations ago. The danger heightens as Mallory is joined by her brother Ryland, with whom Phoebe becomes enamored.

Werlin is a very diverse talent. The novel, most similar to her previous Impossible, will seem light years removed from thriller Double Helix or the critically-acclaimed child-endangerment Rules of Survival. Her writing is superb, but she can be terribly verbose and I find her actual storytelling to be hit or miss. Impossible was a compelling novel that fleshed out one of the great verses of English literature. This current novel is based on much less compelling material. The resulting story is poorly paced and overwhelming, lacking characters with which I could connect. There are no major technical problems with this story, but I just wasn't grabbed by the book.
Posted by Paul at 2:48 PM