The Fool's Girl, by Celia Rees 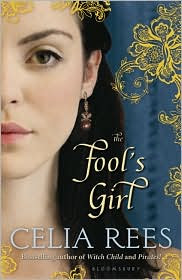 Young Violetta, accompanied by her former court jester Feste, is on the run from traitors who gave her kingdom of Illyria over to the Venetians. She's out for revenge, or at the least to right the wrongs which have been committed. After many struggles (told mostly in flashback), she has made it to London, where she encounters rising theatrical sensation William Shakespeare. But this is a rather different Will Shakespeare than most of us might think of -- he's resourceful and buried in political intrigue. In this story, which combines Italian political intrigue, Elizabethan mores, and Reformist politics, the play is hardly the thing!

This richly detailed riff on Shakespeare's Twelfth Night deserves major props for creativity, research, strong vivid characters, and fashioning a fantastic mix of adventure and magic. I am a bit reluctant to read stories that re-imagine famous historical figures, but this novel is an obvious labor of love (and far removed from any cheap exploitation). If there is a real criticism to lobby, it is for a muddled love story and way too many characters. But you can enjoy this book on so many levels: as historical fiction, loving homage to Elizabethan theater, or just plain rollicking fun adventure.
Posted by Paul at 5:01 PM