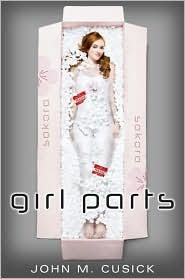 David Sun's parents are worried that he seems disassociated and anti-social, so they decide to get him a companion -- a girl robot named Rose who is programmed to be friendly and accommodating, and to teach him how to relate to others. David is actually something of a jerk and he's mostly interested in figuring out a way to break through Rose's "intimacy clock" (which predetermines how far he can get with her). What no one counts on is that Rose is a very special robot and, as she gains awareness of herself, she begins to see through the game she's been set up for.

Enter Charlie, a boy from the other side of the lake...and the tracks. He's everything that David isn't and offers Rose a chance at gaining agency and a sense of control. But there are forces that want to maintain things the way they are, and this story has tragedy written all over it.

Sort of a Short Circuit meets Better Off Dead (to use two 80s movies examples), Cusick (no relation to the actor) has taken science fiction and mixed it with guy stuff, mostly with an eye for what female readers will be interested in. The guys are sensitive and clueless, the girls desperate and frustrated, and the metaphors transparent. Cusick has a lot of fun things to say about interpersonal relationships, but he goes at it with a sledgehammer. Rose's struggles to get over the boy she was first programmed for, her longing to be like other (real) girls conflicted with her need to be herself, and her desire for agency will all ring true for readers, but it all seems terribly calculated. And that feeling of being set up left me feeling manipulated. Kudos for the creativity, but the polemics needed to be a bit less obvious.
Posted by Paul at 5:11 PM