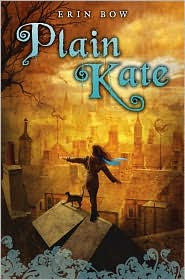 In a world of charms and superstitions, Kate is a magnet for people's suspicions. Orphaned after the death of her father, a master woodcarver, Kate tries to eke out a living as a carver herself. But her occupation, her physical appearance, and the meddling of a strange white gentleman mark her as a witch. When a deadly fog begins to kill everyone in its path, suspicion falls on Kate and she must flee for her life. While she isn't a witch, she bears no small part in what has happened. Ironically, she may be one of the few people who understands what is going on.

On the road, she is initially befriended by roamers and accompanied by a talking cat. As the danger from the fog spreads, Kate has to figure out a way to break the curse, and this means (more often than not) that she is on her own.

While the story is very much placed in a fantasy world, it is hard not to get distracted by the Russian-sounding names and the very liberal borrowings from Russian folk traditions. It is obvious that Bow does not intend this to be Russia, but rather that the world is inspired by Russian culture (in much the same way that Frank Herbert's Dune is based on Arab desert culture).

The story itself is fast paced and the story is a genuine page-turner. The cat provides decent comic relief and is also an integral part of the adventure (I particularly enjoyed that the cat wasn't much of a swashbuckler, but more obsessed with food and naps - like a real cat). Kate is not a terribly strong heroine, but she's resourceful and relies upon a combination of hard work and a strong moral compass that is basically de rigeur in modern YA fantasy.

One warning: The story's ending will rip your heart out, however, so be careful about reading this in public places!
Posted by Paul at 12:46 PM