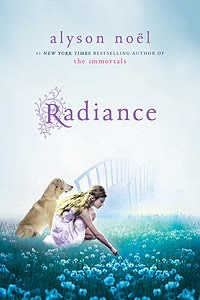 Riley is stuck in the Afterlife in a place known as Here and in a moment called Now. Only twelve years old, she feels that she's been robbed of her life, but she's in for a surprise: no one really cares and, here in the Afterlife, she's expected to work. To atone for the mistakes of her life, she is assigned the job of soul catcher -- a person who convinces reluctant souls to finish their journey. Her first job is to entice the "Radiant Boy" to cross over -- a challenge which has defeated many of her predecessors. To help her with this task, she is assigned a guide named Bodhi (who she immediately dislikes due to her nerdy appearance).

This short book, the first in a new series, left me unmoved and unengaged. The major problem is that the characters didn't feel right to me. Riley talks and acts much too mature for a tween and Bodhi never really moved much beyond being pompous and distant. The lack of realism in the characters is not helped by the story itself. The challenges that the characters face are very hyped, but resolved surprisingly quickly (as if Noel had no interest in really telling the story). Between the lack of suspense and the lack of chemistry in the characters, there isn't much to invest in here, and certainly not enough to make one want to pick up the next installment.
Posted by Paul at 8:58 PM