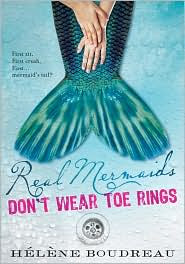 A year ago, Jade's mother drowned, leaving her all alone with Dad. All of which makes it ever so much more awkward when she gets her first period at the mall after she's run out of money. But having to endure buying feminine hygiene products with her Dad is only the beginning of her surprises. Soaking in the tub shortly after her initial ordeal, her legs turn into fins!

It turns out that her mother was actually a mermaid and Jade has inherited some of the same genes. It also appears that Mom did not drown a year ago, but was actually kidnapped by a group of mer-convicts. Jade and her Dad have to figure out a way to save her without letting anyone know the true situation with Jade and her Mom. This proves challenging as Jade has to keep coming up with excuses to avoid her best friend Cori and also stop her endless (and embarassing) run-ins with cute boy Luke.

It's pretty hard to do much that's new with the mermaid genre and this book doesn't even try, recycling several ideas from other books. Similarly, it breaks no new ground in the younger teen romance department. But it is nonetheless an enjoyable read. The adventure can get a bit intense and doesn't mesh so well with the romance side of the story, but the book has a decent pace and a satisfying conclusion that ties most everything up (while leaving room for a sequel). People who like other mermaid stories (e.g., The Tail of Emily Windsnap, etc.) will enjoy this book.
Posted by Paul at 8:46 PM