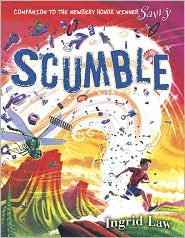 As anyone who has read Savvy knows, when you turn thirteen, you get to find out what your special power is going to be. Some people get good ones (like being able to turn invisible) while others get doozies. When Ledge has his birthday, he's really hoping that he'll gain the superhuman speed that will allow him to outrace everyone in a marathon, but that's not how everything turns out. Instead, his particular savvy appears to be the ability to make things fall apart!

Now, he must find a way to control his power (and learn to "scumble" it) or else risk having to spend his life living in isolation because his powers are too destructive and dangerous. And with dark days fallen on his family's ranch and the local community, Ledge really has chosen a fine time to be causing trouble!

"Savvies" are of course a wonderful metaphor for puberty and coming of age. Just as in the first book, Law does a fantastic job of exploring the anxieties of pre-adolescents as they look forward to the changes in their lives to come. It's not an entirely original plot device of course, but I think Law does it with great gentleness and insight which is certain to make this story a crowd-pleaser.

I was less thrilled by the story itself this time around. Much of it didn't make much sense. It is entirely possible that it doesn't need to make sense since this is fantasy, but I found the logical gaps in the story distracting (Why doesn't ledge want his family to know that Sarah Jane has smuggled herself into the wedding? Why doesn't he enlist his Mom's help is getting Sarah Jane to stop creating trouble? And so on). It seemed to me like it would have been easier to spin the story from simpler stuff and more plausible motivations.
Posted by Paul at 3:31 PM