The Things A Brother Knows, by Dana Reinhardt 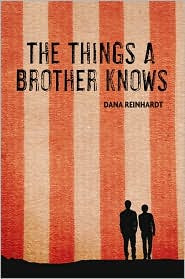 When Levi's brother Boaz comes home from the War, everyone is terribly excited. He's an honest American hero. A Marine. (Admittedly, his family is most happy that he's alive) But something about him is not right. He stays in his room. He studies maps. When he finally emerges, he claims that he is going to hike the Appalachian Trail to unwind and relax. But Levi figures out the truth: Boaz is heading out on a hike alright, but it's in an entirely different direction. So, Levi tracks him and forces Boaz to let him tag along on his quest. What results is a road story on foot, where Levi gets a chance to learn what his brother has been through in the past years.

War novels don't usually hold much appeal for me -- they either wallow in patriotism or have some other sort of political axe to grind. This novel, however, transcends the genre. Yes, I was occasionally reminded of Born on the Fourth of July or The Deer Hunter, but this is really a story about two brothers - both on the cusp of manhood - learning to relate to each other as adults. As a younger brother myself, I found the story very easy to relate to (even if neither I nor my bro have any real military experience). The ending is bit too feel-good for my tastes, but there is such strong material that I almost needed that lightening of the mood at the end to make it through.

Reinhardt has turned out to be a versatile storyteller. From Harmless (with its shocking, but ultimately After School Special-preachiness) to the chicklit of A Brief Chapter in My Impossible Life to this current definitely masculine self-realization, she has a keen ear and eye to the universal search for self. Her topics are potentially provocative, but handled in a unique and fascinating manner.
Posted by Paul at 1:28 PM