This Gorgeous Game, by Donna Freitas 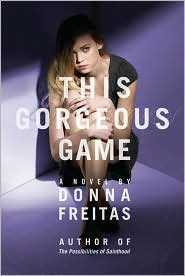 When Olivia discovers that she has won the first prize in Father Mark Brendan's literary challenge, she is ecstatic. There is the recognition and the cash prize, but most of all, there is the chance to study directly under Father Mark, a contemporary literary legend. At first, Father Mark's undivided attention is flattering, but soon Olivia begins to find it suffocating as the man doesn't seem to ever leave her alone. And while it makes no sense to her, she can't escape the feeling that his attention seems less-than-innocent.

A genuinely creepy story about inappropriate sexual attentions. Freitas faces a difficult challenge: presenting Olivia's inability to cope with Father Mark as believable yet not also portray her at the same time as pitiful or weak. To pull this off, first we have to believe that Olivia is a true believer in her faith. Freitas does a good job of showing how Olivia can be worldly yet faithful and obedient. The next step is that we need to believe that someone in her shoes could ever see Father Mark as not being a smarmy perv. This doesn't work out as well, as we don't get to see much of him before he starts getting all creepy. The result is a story that is only partly pulled off.

I'm a big fan of books that can tell a story about religion with a straight face and respect. Given the subject matter here, it would have been very easy to just blackball the entire Catholic Church. It also would have been a cheap shot. And so, I really appreciated the way that Frietas validated Olivia's faith (and the faith of her family and friends) in the face of such a horrible case of abuse of power. That takes sensitivity and is worthy of praise.
Posted by Paul at 5:30 PM