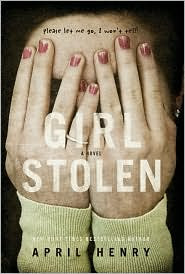 Griffin's attempt to carjack goes terribly awry when he finds Cheyenne in the backseat of the car. At first, Griffin is afraid that Cheyenne will identify him, but when he learns that she is blind, he realizes that she cannot. And being blind and addled with a case of pneumonia, Cheyenne is in no position to cause much trouble.

But Cheyenne is no passive victim. Her handicap has taught her to be self-reliant and she makes several decent attempts to escape her kidnapper. Griffin might have even let her go as he mostly just wanted the car. However, when Griffin's father learns how much money he could make from ransoming her, the situation turns decidedly more dangerous. Eventually, Griffin and Cheyenne find themselves as unlikely allies in a desperate attempt to escape with their lives.

For the most part, this is pretty innocuous suspense stuff. There's some attempt to inject educational material about blindness, burn recovery, and dyslexia into the story, but this is not a story with any deep literary pretensions. I really liked how resourceful and tough Cheyenne is and that she avoids being a hapless victim. Unfortunately, no one else really ever gets interesting and the adult bad guys are uninspired.
Posted by Paul at 2:13 PM