Her and Me and You, by Lauren Strasnick 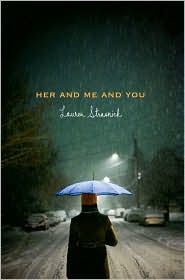 Alex and her mother move to Meadow Marsh after her father announces that he is leaving them for a younger model. Meadow Marsh is Mom's hometown, but she's so lost in despair that Alex has to fend for herself. When Mom's friends' children end up being poor allies, Alex befriends Fred and his twin sister Adina. From the start, Alex observes that the twins seem really close (and wistfully notes that it is like Alex and her estranged BFF back home used to be). However, as Alex and Fred's friendship starts to grow, Adina's response turns from jealousy to something a bit more psychotic.

I really liked the premise of this story. It's fresh and original and has a lot of potential as a psychological thriller. The characters are interesting and the portrayed landscape of jealousies and insecurities feels very honest (albeit a bit painful to read). Unfortunately, the actual story is thin. Strasnick gets the job done, but it could have gone so much farther. The drama and tension could have kicked up a notch or two without growing exploitative, by extending the time it takes everyone to observe Adina's unusual behavior. Stretching things out, would have made more of a page-turner! The relationships with the adults are left grossly undeveloped, despite their importance in explaining the motivations of the kids (Alex's susceptibility, Fred's denial, and Adina's dependency). Relationships between these three kids and their peers would also have been ripe with possibilities (despite the importance of Alex's separation from her friend back home, that plot thread is never explicitly tied to the overall issue). In sum, I like what is here but I wanted more!
Posted by Paul at 11:03 AM