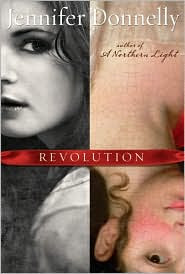 In the aftermath of the violent death of her younger brother, Andi struggles with depression and survivor's guilt. Her concerned father brings her to Paris to separate her from her equally-depressed mother and to give Andi a fresh start. There, she stays with a family friend who is researching the French Revolution. Amongst the papers and other memorabilia of the period that this friend is collecting, Andi discovers a two hundred year-old diary written by Alexandrine Paradis, caretaker to Louis-Charles, the youngest son of King Louis. Alexandrine is nearly the same age as Andi and she finds herself quickly drawn into the account of Alexandrine's doomed efforts to save her charge, finding parallels with her own failure to protect her brother. But as the story veers towards its inevitable tragedy, Andi finds it harder and harder to separate present from past, and reality from illusion and madness.

This very rich novel combines fine historical detail with contemporary hipness in the streets of Paris. There's an awful lot going on (Andi's worries about her sick mother, struggles against her father, on-and-off relationship with a Parisian taxi driver, her music, and never mind all that French Revolution stuff!). Thankfully, there's 470-odd easily-turned pages to get through it all! While I had some minor quibbles with Donnelly's shaky grasp on contemporary music, her 18th century material is strong and her storytelling more so. I was sucked in, even when the story seemed to jump off a cliff (or a tall building?), I wanted to see what happened next.

All of that said, this novel isn't really YA despite its younger heroine. The teens in this story are mostly grown up and definitely independent of any pesky authority (Donnelly explicitly acknowledges the lack of a cultural concept of adolescence in 18th century France and makes little attempt to explore it in 21st century either). This isn't a story of coming of age, as much of making life-changing decisions, that is, standard adult novel material. As such, it is excellent.
Posted by Paul at 1:56 PM