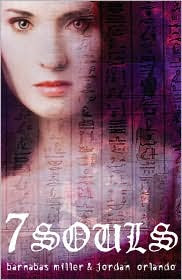 Mary's 17th birthday starts off very strangely, waking up naked in a display bed at the downtown Crate & Barrel shop. Her day goes decidedly downhill from there, as just about everyone ignores her, her boyfriend dumps her, and she ends up dead at the end of the day. But then things get plain weird as she finds herself taking possession of other people's bodies and slowly unravels what happened and why it did. By the end, she will be well enveloped in the world of brand name consumption, bad role-modeling, and Egyptian curses -- a combination which can only make sense in a book like this.

The story suffers a great deal from its general incoherency. As it careens from weird point to even weirder point, I kept hoping that an explanation would finally pop up that made sense. I didn't even mind when the plot shifted to supernatural explanations, but in the end things just don't make any sense and I'm not sure the authors ever intended them to do so. Rather, it's much more fun to just let the characters play Gossip Girl schtick (by which I mean pointless material consumption with no consequences or parental supervision) and throw in a lot of ultimately meaningless action.

I'd give this a miss. Miller is apparently a former hack for Alloy Entertainment. I think that basically says everything you need to know about this book.
Posted by Paul at 7:56 PM