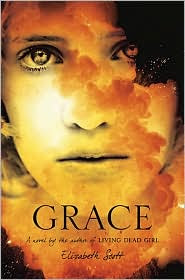 In a dystopian totalitarian world, Grace is a fallen "Angel" (a young woman raised to be a suicide bomber to help her People strike back at the state). She was sent from her village in the Hills to eliminate the Minister of Culture. Once in place, however, she loses her will and ends up fleeing for her life. Exiled by her home as a failure and hunted by the regime as an enemy of the state, she flees for the border. Helping her escape on a train to the border is a young man with issues of his own. During their long trip, she reflects upon her life, her calling, and her reasons for failing to fulfill her mission.

While well-enough written, the story is thin and consists mostly of recycled stereotypes of totalitarian regimes, recycling the many horrors which should be familiar to anyone who has taken World Civ. As such, it isn't really clear what this particular piece adds to the cannon. For a better version of the same story, consider Ayn Rand's We the Living, Zamyatkin's We, or (of course) George Orwell's 1984. The point being that the basic theme here (totalitarianism sucks, but the human desire to survive is more powerful than any regime) has been done before.
Posted by Paul at 4:15 PM