The Ruby Notebook, by Laura Resau 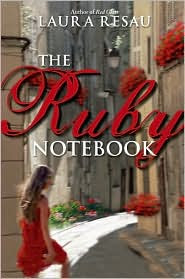 In this "companion" (i.e., sequel) to The Indigo Notebook, it is a year later and Zeeta and her mother have moved from Ecuador to Provence. Zeeta is looking forward to being reunited with Wendell after a year apart, but she is also worried. Even though they have stayed in touch through daily emails and phone calls, a lot has changed in the past year (and it isn't just that the color of her notebooks that have changed!). In her mind, it seems like she is an entirely different person. Complicating matters, she's met a new boy and, while she isn't sure how she feels about him, it makes her wonder if Wendell is really the love of her life or just a phase from another time and place.

This fairly busy story shows much of the same love for cultural detail that is found in Resau's other books, but with a twist. In previous reviews, I chided her for always writing about the same things (indigenous subcultures in Latin America), but by switching to France, she's attempting to prove that she's far more versatile. While I can claim no credit for her change of scene, I will give her serious props for stretching herself. That said, however, I found the actual result a bit disappointing. She obviously knows the region, but not as well. And she lacks the obvious affection for France that she holds for Mexico. The result lacks the warmth that was so noticeable and noteworthy in her previous novels.

The current volume is also a more somber affair that plods fairly heavily through Zeeta's doubts and fears (focusing on her "ghost" and the search for it), before finally taking off in the last 100 pages or so with an unrelated (but much zestier) adventure.
Posted by Paul at 3:58 PM