The Unidentified, by Rae Mariz 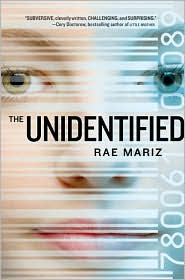 Katey and her classmates live in a world which, while quite different from ours, will seem eerily familiar. In their universe, teens "play" their way through school, scoring points on video games to learn their lessons, while being carefully monitored by the corporations that pay for their education. Internal social networking sites monitor their every thought and the sponsors spend considerable effort to use their thoughts and preferences to fine tune their marketing efforts. The kids, bribed by constant corporate giveaways and encouraged to form their cliques to promote sales for the sponsors, live enthralled by the sparkly world presented to them (part actual education and part advertisement). However, a rebel group of students are trying to subvert the paradigm and Katey (always something of an outsider) finds herself recruited by both the rebels and by the school's sponsors/administrators.

What starts off as a pretty heavy-handed fable about the dangers of materialism becomes over its course a nicely nuanced critique of the insidious influence of commercialism into public education (perhaps, the dream of our current Governor here in WI?). While obviously exaggerated, it would be hard to deny the extent to which most of the situations described in this alternate reality have some basis in our own, whether it is privacy concerns on social networks, corporate sponsorship in our classrooms, commercialization and co option of teen culture, and so on. I'd like to think that this book would make a very interesting catalyst for a hearty teen discussion about these issues.

Beyond its polemical nature, the story probably suffers a bit. The characters are thinly drawn and the narrative is cumbersome (slow at first and rushed at the end). So, as straight fiction, the book could be considered a bit weak. But I keep coming back to the message and its value as a sensationalized way to open a discourse on some serious non-fictional discussion.

Sharp eyes will notice that the UPC symbol on the cover is the book's actual code.
Posted by Paul at 10:07 AM