The Absolute Value of Mike, by Kathryn Erskine 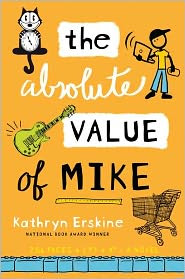 Mike's father is absolutely convinced that Mike should become an engineer. Never mind that Mike is hopeless with math or spatial relationships. Dad is obsessed. So, when Dad gets an opportunity to go overseas for the summer, he decides to send Mike to his distant relatives Moo and Poppy in rural Pennsylvania to help Poppy build an "artesian screw" and hone his engineering skills.

That's when the fun really begins. Moo is half-blind and confused, and her driving is downright terrifying. Poppy is grieving his dead son and completely tuned out. The entire town is obsessed (and united) around the goal of raising enough money to adopt a Romanian orphan named Misha. As Mike gets sucked into the plan, he discovers that he may make a lousy traditional engineer, but he's good at getting this oddball group to come together.

Erskine has a wonderful ability to come up with lively and original stories. So far, she hasn't fallen into a rut and each of her three novels has been unique. While stories about quirky small towns tend to drive me nutty (as they usually come across as big city stereotypes of what life in rural areas are like), this one doesn't fit the mold. For while the characters all seem like crazy hayseeds at first, their behavior is eventually explained. All of which sends a message to Mike (and the reader) that initial impressions are deceiving.

Mike is also an appealing character. He's quick tempered, jumps to conclusions and a bit stubborn, but these are traits that actually serve him well (and to which boys as a whole will relate). He occasionally comes across a bit too insightful for his age (14), but struggles realistically with self-identity and his maturing relationship with his Dad. While many classic YA books have done this too, it's fallen out of vogue. It's nice to find a good coming-of-age boy book. And it's particularly nice to find a book for boys that focuses on human relationships and not blowing things up or winning the big game.
Posted by Paul at 10:04 AM