The Big Crunch, by Pete Hautman 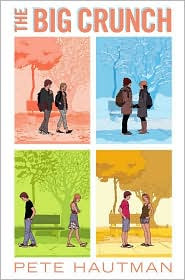 June has been dragged from one town to another by her "never look back" father. She's learned that everywhere she goes, schools and kids are pretty much the same. That is, until she meets Wes. It isn't love at first sight, but after a few false starts, they fall for each other. Unfortunately, soon enough June has to move again. This time, though, is different and June and Wes struggle to stay together, realizing that friends in life are not always interchangeable.

While there isn't much of a plot, it's an interesting book. The romance, despite the hype of the dust jacket (which also strangely refers to the girl as Jen), is by-the-numbers. But that really isn't the point here. It's the characters who are interesting. Their language is refreshingly frank and sounds authentically real. And not just the kids -- the adults also sound painfully real. Cliches like the totally self-absorbed teen or the arrogant/clueless adult are tossed out, and replaced by real human beings. The result are people who are plain appealing to read about. So what if the story breaks no new narrative ground? I could read these folks reciting the phone book and would still be interested!
Posted by Paul at 12:13 PM