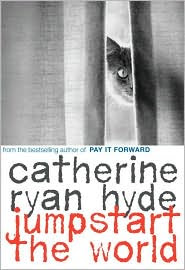 When 15 year-old Elle's mother decides to settle down with her new child-hating boyfriend, Mom decides that Elle should be settled down in her own apartment. Despite feeling hurt by the abandonment, Elle doesn't really mind because she's always been a loner (and also because Mom has never been very attentive in the first place). Elle has learned that she can't really allow people into her life.

That starts to change through the adoption of a rescue cat and her hard crush for the older man next door. The cat isn't terribly friendly and the man next door is a bit different. In fact, Elle's entire new world is full of misfits and colorful characters, but somehow she finds what she needs from the diverse group.

"Jumpstart the world" as a phrase will probably not resonate as well as Hyde's earlier "pay it forward," but she is attempting to weave the same magic: telling a story that is deceptively simple while delivering a bigger message. As a story, though, it didn't work. In this case, the message is hindered by the narrator, who is maddeningly contradictory. She's astute and well-spoken, but immature. She's capable of taking care of herself and articulating complex feelings, yet prejudiced and selfish. Being so articulate, her self-realizations sound fake (you find it hard to believe she was ever so ignorant in the first place) and her changes are too sudden.

The supporting characters are also very thin. In some cases like Elle's Mom or Molly this works very well, leaving open plenty of room for reader-supplied elaboration. With others, like Elle's schoolfriends, the flatness seems a bit lazy.
Posted by Paul at 10:15 AM