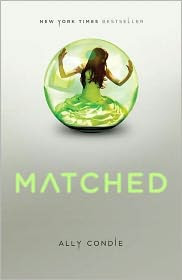 It starts with the matching ceremony where Cassia, against all odds, ends up betrothed to her childhood friend Xander (she can't believe her luck, since the matching ceremony usually links you up to a complete stranger!). But when the face of another local bad boy named Ky accidentally appears instead of Xander's on the forms, the mistake triggers a series of events that has Cassia questioning the rules and customs of her society.

In this future dystopia, choice has been replaced with statistical predetermination and planning. Even the act of teenage rebellion is carefully charted, observed, and controlled. Cassia though is one tough nut to crack and for every revelation of official control, Cassia has a couple of secrets up her sleeve to strike back.

While the novel starts off as some sort of YA love triangle (and occasionally drifted back into that territory), author Condie is sharp enough to not dwell on that for long. Cassia knows that there is more at stake in this world than her romantic feelings.

I liked Cassia. She's bright, brave, and insightful. Condie lets her be girlie enough to make her realistic and relatable, but she has strength. Her rebellion against unjust authority will universally resonate with her readers (and it's nice to remember that Huxley's Brave New World appealed to the young in his day as well).
Posted by Paul at 9:51 AM